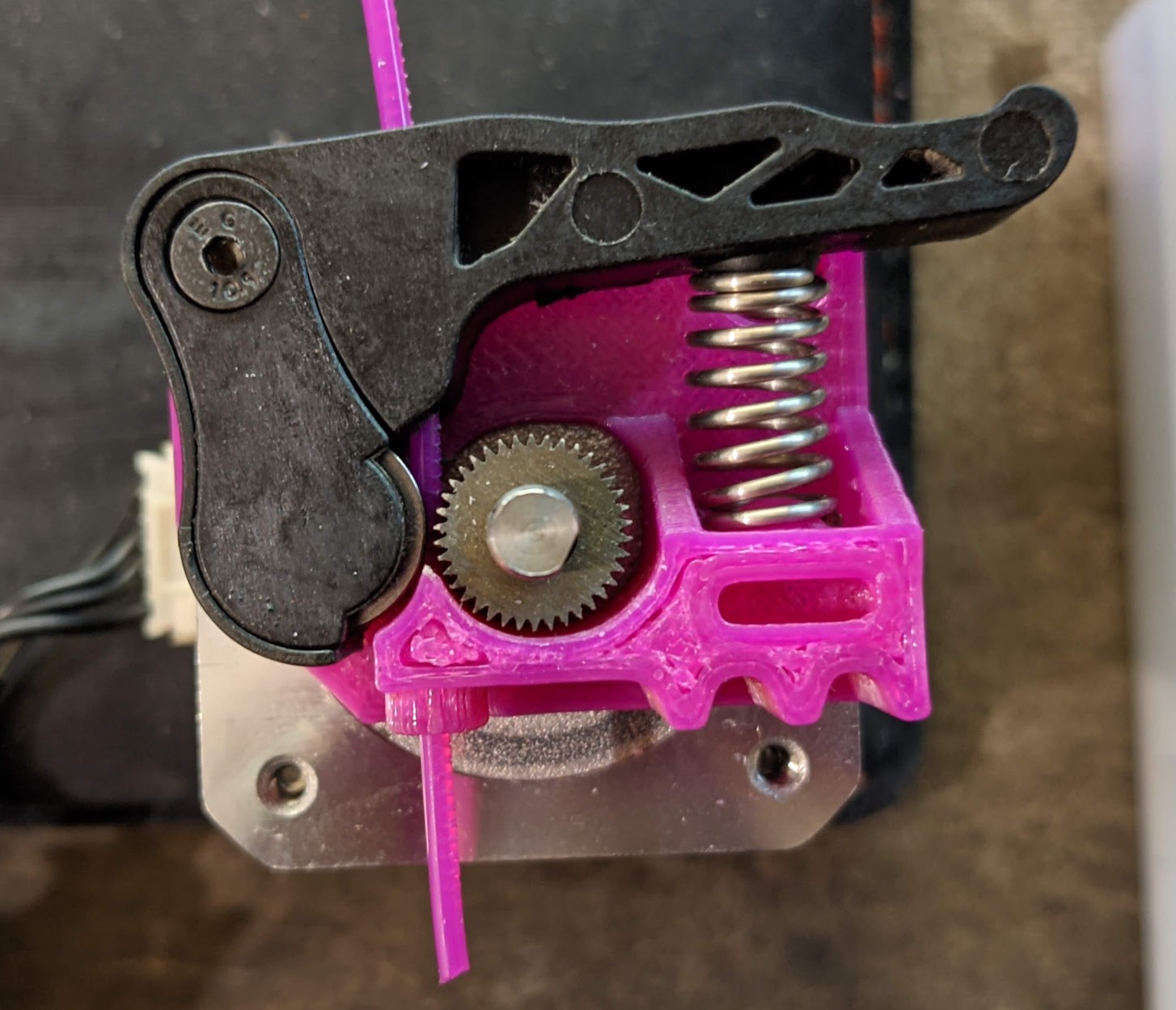 This has been a real challenge for me. Being a direct drive extruder you would expect it to handle TPU really well but that is just not the case. There are some flaws in the design of the extruder that cause TPU to end up wrapping around the extruder gear. Luckily these flaws can be fixed with a 3d printed part that is simple to install.

To give a little primer on why this is an issue I can demonstrate it with a picture. What happens when you use TPU is it tends to go for the path of least resistance. In my case this meant being wrapped around the extruder gear no matter how slow I printed. Below it I have a picture using my amazing Paint skills showing what happens to TPU with the original extruder part.

For me dealing with the above issues took hours and hours of my time. When the extruder gets clogged like this you usually must completely disassemble it to remove the blockage.

I started looking for a replacement part. There is nothing made for this specific printer however many machines out there are made on a similar platform. I ended up finding a part that worked perfectly for my printer but was made for a different one.

I printed the first one in PLA as a test and it worker pretty well. After my tests and proving it worked I made one out of PETG to be extra safe. The main thing it does is remove the gap between the gear and this part where the filament is. This was enough to prevent any clogs due to the filament wrapping up. I was able to do a 60mm/s print with TPU which is way beyond speeds most people print TPU at. I think 40-50mm/s is probably a better bet and that is still fast.

It had one single issue with the filament hole not being large enough but I fixed that with a drill bit. I will recommend you do the same thing as me for a few reasons. Trying to hit a hole that is the same size of the filament blindly is really tough if not impossible. Also when you go to pull hot filament out of the extruder to do a change the “plug” at the end is usually a little larger than the filament strand itself. It’s a good idea to give yourself some wiggle room here because you might clog the hole with your hot filament and need to disassemble this again. Has not happened to me yet, but it is a slight concern.

I have been printing with this upgraded extruder part for over a month now with no issues at all. It handles all the PLA and PETG I can throw at it without issue and TPU is also now on the menu which is awesome.

I know what you’re thinking. Where the hell can I get this awesome model?

This revision was made by Kmskelton. It is a remix of another file which itself is also a remix. It goes down a little deep but the important part is the model I found to work well is the one linked above. It has an integrated tube so you do not need to put a PTFE tube in there.